Sometime in the late 1910's, alpacas began regaining their importance in the Peruvian fiber industry. Improved infrastructure, including motorized vehicles and better roads helped the developing commerce, and a fiber trade was established in Puno and Cusco, while mills were open in Arequipa, Peru.

During the 1st World War, Alpaca was rediscovered by some unknown person who caused the creation of suits of Alpaca to be worn by aviators under their leather garments.  These airmen blessed the warmth of Alpaca. In Europe, the popularity of Alpaca began to reemrge and flourish, and many English and French servicemen sought out supplies of Alpaca garments and readily purchased them.  A few US servicemen brought home Alpaca clothing for themselves or for loved ones.

With the end of World War II, efforts were made to vertically integrate the Peruvian alpaca industry.  The first successful company to do this was Michell.  Founded by an Englishman, Frank Michell, the company imported its first equipment in November of 1946, and by June of 1947 was putting together Peru's first alpaca textile mill. Michell and Grupo Inca, a later evolving, but very competitive mill, controlled much of the alpaca industry from the mid 20th Century to the present, proving "You can’t keep a good alpaca down"!

1931 saw the famous Bobby Jones wearing alpaca sweaters over his shirts on the golf course, followed by a host of others, but made most famous by Walter Hagen.

Unlike clothing of the previous century, knitted goods began to emerge, post war. Previously, knitted clothing was made by hand, now machines knitted for us, and the growth of a knitwear industry began.

In the 50’s alpaca emerged as a status symbol among the country club set. 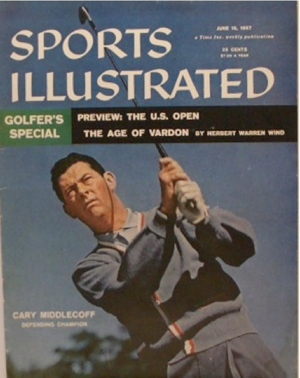 Sports Illustrated by EbscoHost - 1954 THE MERCHANT PRO
"Today the golf pro would rather clean up on clothes than clubs…  He knows a good thing when he sees the newly popular alpaca cardigans at $40 outselling traditional golf essentials..."

Alpaca was used as a way of setting the stage for being luxurious and upper class in The Valley of the Dolls 1966 by Jacqueline Susann and again in the movie in 2000.

Alpaca was touted in music with the song by Meryn Cadell “The Sweater”. The song captures the innocence of high school love and the disappointment of finally getting your boyfriends sweater only to discover it’s acrylic and not alpaca!

It even made it into comedy. In PERFECTION, Lloyd Mangrun said to the comedian, George Burns
"George, you look perfect . . . that beautiful knitted shirt, an alpaca sweater, those expensive slacks . . . You've got an alligator bag, the finest matched irons, and the best woods money can buy… It's a damned shame you have to spoil it all by playing golf!”

Called “Alpacas” plain and simple, everyone knew the lingo. These cardigans had the largest spotlight on them when Jack Nicklaus and Arnold Palmer, or any one of a dozen other golfers, wore one of their many alpaca golf cardigans in bright bold colors. Arnold Palmer took the alpaca cardigan mainstream through sales and marketing at golf clubs across the nation.

A favorite with the Brat Pack, Alpacas can be seen worn in the original Oceans 11. Another celebrity, Bing Crosby wore them all the time, both on the golf course and on many of his TV specials. Frank Sinatra gave alpaca golf cardigans as gifts, buying them by the dozens. Alpaca was elite.

As the dawn of synthetics arose; disco fever, shoes filled with fish and vinyl skirts, man-made clothing emerged, alpaca was yet again put into a closet only to return via nostalgic episodes of Happy Days. As a natural textile, alpaca was relegated to the homespun natural hippie culture, or brought home from back-packing trips to South America. Fake “alpaca”, really no more than llama blended with acrylic and or wool, began to be sold for $39.00 at the flea market.

In 1984, the first alpacas were imported into the United States and alpaca took its rightful spot on the map in our country. The late 20th Century has seen the development of  alpaca processing operations established to benefit the smaller producers in South America.  There are a number of companies exporting product made in relatively small shops in Arequipa and Lima, and there is a great deal more finished alpaca product being exported from both Chile and Bolivia. 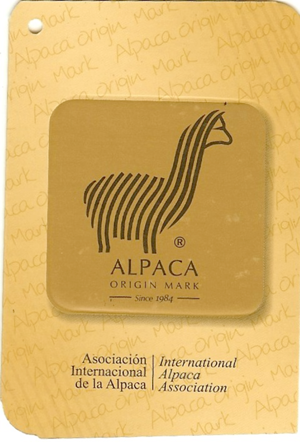 With a wider group of manufacturers, often struggling for competitiveness, and regulation of content nonexistent, the International Alpaca Association was founded. One of the objectives of the association is to clearly define the quantity and quality of the alpaca fiber used in finished goods. This organization has created branding mechanisms to insure consumers that they are buying real alpaca and in the amounts specified. Branding is a voluntary, fee based service for reputable designers, knitters and mill works who work with alpaca. This is the consumers insurance for obtaining quality alpaca goods with a clear understanding of the alpaca fiber quality and content.

With signs that China is showing interest in alpaca, the power of Peru may be further weakened.  Reports suggest that China is now the largest purchaser of alpaca fiber in the world, and is blending it with other fibers. Reports of inaccurate quantities of alpaca in these blends are surfacing.

With knitwear being a multi billion dollar industry and sweaters emerging from just a cold weather necessity, alpaca has more to contribute to the consumer. Its thermal properties not only insulate from the cold, they insulate from the heat and offer wicking that is unmatched, providing some of the finest knitwear products available.

Today Americans can enjoy the luxury of pure alpaca, as they never could before, while also enjoying alpaca blends creating dramatic and dynamic style. Alpaca is reaching into the organic and natural textile market and filling the need for people who want to step away from synthetics, and chemical derivatives that are used to make apparel. Alpacas’ day has finally dawned for American consumers.